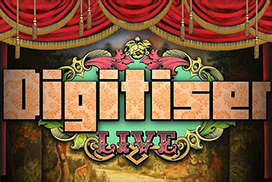 The production of Mr Biffo's Found Footage - a sort of unhinged, loose sci-fi conspiracy comedy/horror sketch series - took place throughout much of 2017, and generated hours of material. The pilot episode was shown at Digifest 2016, and led to a successful Kickstarter to fund a full series, which graced YouTube in September of that year, with a new episode released each week.

To celebrate this achievement and mark its release, a premiere screening was held at Harrow Arts Centre in London, where completed episodes and work-in-progress segments were shown.

The evening was attended by many of those who featured in the series, such as Stuart 'Ashens' Ashen and Violet Berlin, along with fans and backers.

Glimpses of the night can be found on photographer Tammy Lynn Kwan's website, along with her photos from the filming of the grand finale of Mr Biffo's Found Footage, The Trojan Arse Protocol.

The event included a Q&A with Mr Biffo himself, and was hosted by Paul Gannon (CheapShow/Barhsens) - who would later become an integral part of the Digitiser family.

Of course, this most stellar of events is now most famous for the fact that Mark 'Mr PSB' Williamson burst into Mr Biffo's toilet cubicle at some point over the course of proceedings. Which was entirely on-brand.